After leaving Florida Caverns State Park, we headed a bit south toward the Panhandle coast, to our next destination…Saint Andrews. I had heard very good things about the park and the awesome beach within. The weather was going to be a mixed bag for the next couple days, but no big deal, we had gotten very used to that.

As we pulled into the park, one of the first things I noticed was how huge the campground was. There were over 150 sites. For a state park, or the state parks we usually stay in, that’s ginormous. When I originally booked our site, there were a few spot close to the lagoon to choose from. So I picked one that had a good amount of sun, shade, and scenery.

It was POURING when we arrived, and Fran was totally blinded by the rain while attempting to back into our site, which had a narrow entrance. No worries though, we had our trusty walkie-talkies and I was able to navigate her smoothly into our spot.

The boys, hanging around

After an evening of being rained in, it was good to get out and explore the next day. Our site backed right up along the lagoon, and the dogs enjoyed watching the sailboats and exploring the area. The campsite was also laid on in an excellent way, making it great for going on long walks with the dogs. Luke, of course, wanted nothing more than to be lazy and lay in the sun…so we let him do his thing all morning long.

Our spot backed up to ‘Lower Grand Lagoon’. 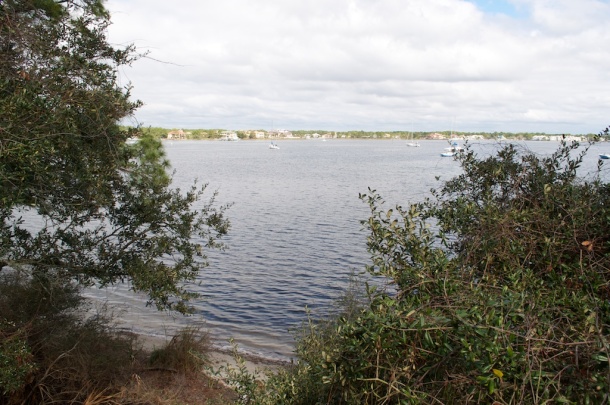 Later in the day, we ventured out of the campground and into the park area. Along the way, Fran spotted a young deer on the side of the road. She slowed the car down so we could check it out and I snapped a few pics. It stood there and watched me, like this kind of thing happens all the time (which I’m sure it does), not even the slightest bit bothered by us being there. 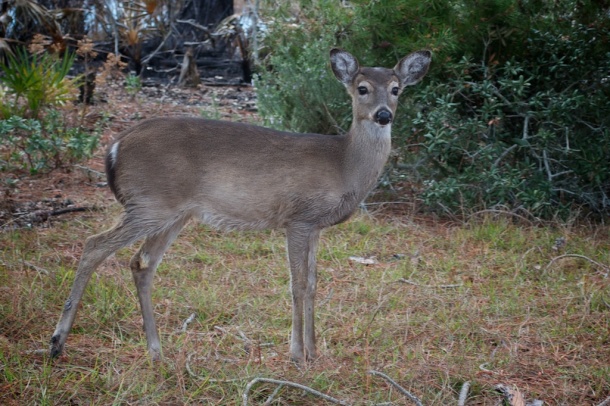 After a bit we found our way to the ‘alligator lake’. There was a boardwalk for people to stand on at the waters edge, and then a trail that wound along the lake. I didn’t really think we’d see any gators, but I still wanted to take the hike and see if we got lucky.

Along the way we passed an older couple who told us there indeed was an alligator about a hundred yards down from where we were, right at the edge of the lake. I was excited. Fran? Not so much. As we walked along the path, she was jumping at every little rustle in the brush and I couldn’t help but chuckle at her.

Once we walked the short distance, I spotted the gator. Fran stood WAY back while I went to check him out and take some photos. I have no idea what she was afraid of…this guy was TINY, maybe 4.5 feet at the most! I didn’t have my zoom lens on me, so I had to get as close as possible to get some shots. He opened his eyes for a bit to see what I was doing, then lazily closed them and went back to snoozing. Once Fran realized he wasn’t going to jump up and eat us, she ventured over to take a look. Even though he was just a lil dude, and the only one we saw, I’m glad we were able to see a Florida alligator in its natural habitat. 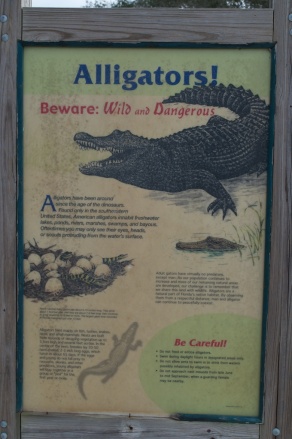 Eventually, we made it over the the beach area, just a bit down the road from the lake. It was incredibly sunny out, but we could both see big storm clouds approaching, so I knew that this would be a quick visit.

Saint Andrews beach is absurdly gorgeous. The sand is soft and fine, and the water is so clear and blue. We have been to so many beaches over the years, from those whose deep dark cold vastness swallows you up to others with crystal clear warm waters that you find yourself longing to float in all day long. I could definitely see myself hanging out and relaxing on this beach…if the weather wasn’t about to get nasty. 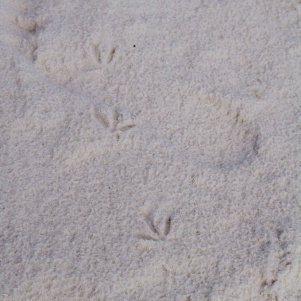 The following day, after the storms passed through, we headed into town to do some exploration. Panama City is a great little beach town, with plenty of access to the ocean, restaurants right on the beach, surf shops, and places to do some shopping. There were a couple of geocahces that I wanted to check out, so away we went in search of their hiding places…

In my last post, I mentioned geocaching and how terrible I am at finding the goods. Things haven’t changed much since then (I blame my poor eyesight). However, I am still awesome at navigating us to where we need to be. Then I leave the searching up to Fran. Our first cache proved a bit of a challenge for even her to find. It was well hidden and in a somewhat busy area. The game of geocaching is 100% legal, but you don’t really want to draw attention to yourself as you search through 3 foot high grassy embankments. The muggles* start to get curious or concerned, and your game may end before it even begins. Eventually, I gave in and read the hint, which helped Fran find it pretty quickly. wOOt!

*From the geocaching.com website – Muggle: A non-geocacher. Based on “Muggle” from the Harry Potter series, which is a non-magical person. Usually, this term is used after a non geocacher looks puzzled after befriending a geocacher searching for a cache, or when a non-geocacher accidentally finds a cache. Geomuggles are mostly harmless.

What’s inside a typical cache

The second one, while a bit off the beaten path, was much easier to find. Both caches were supposed to have trackables inside, but neither one actually did. We have yet to find one, but are keeping our fingers crossed that we some upon one someday soon and can help it along in its journey!

Wandering around searching for things makes you hungry, so we stopped into Schooners for a late lunch. It was a nice place, right on the beach, and we enjoyed watching the sun sink lower in the sky over the ocean as we ate some delicious seafood. We talked to the waitress a bit about winter in Panama City. She said that while it quiets down tremendously compared to the summer, they still have a good amount of visitors in their off season during the winter months. Like us, heh.

Our time in St Andrews and Panama city was great, and I’m glad we got a chance to visit. I would really like to come back in the warmer spring or summer months and see, what I imagine would be, a booming beach town. Maybe one of the years we will make the trek down for that. 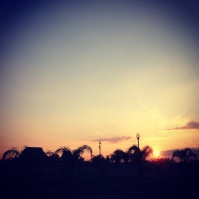 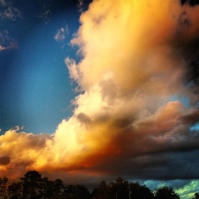 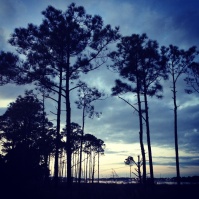 We’d spent over a month traveling around Florida, but it was time to wave goodbye to the sunshine state. After packing up, we headed west towards our next stop…New Orleans! The ride there was smooth sailing. We did find ourselves in another tunnel, but this time it was safe (and legal) and nothing like the white knuckle ride through the Baltimore Harbor one. 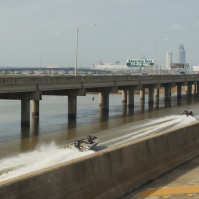 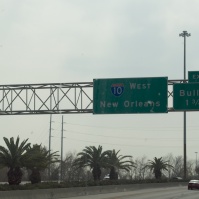 We arrived in New Orleans early enough to unpack, feed & walk the furr-butts, and hop the shuttle into town. We knew that Mardi Gras is a big celebration…but I’m not sure we had any idea just how gigantic it truly was until we stepped onto Bourbon street. It was packed. We both looked at each other with a bit of concern on our faces because we knew it would get even busier and crazier as the days went on, but we were amped up and ready for the madness!

At the time of posting this, Mardi Gras is officially over. It has been a wild ride, to say the least. From the sights we have seen, to the food we indulged on, and everything in between, I honestly don’t even know how I’m going to explain it all. But I promise I will post an update soon! Till then, keep on keeping on! 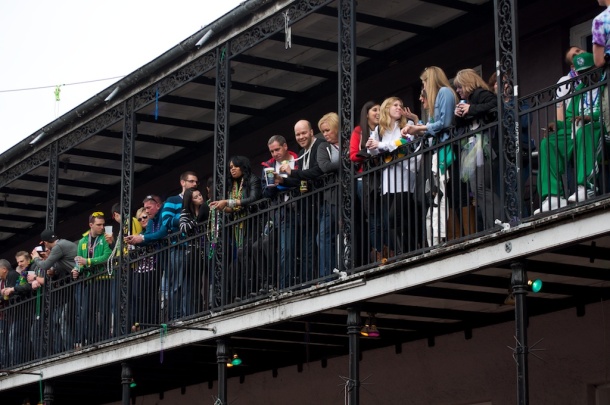 2 thoughts on “See You Later, Alligator”

Go Back in Time…